The Wines of Georgia

At the crossroads of Eastern Europe and Western Asia, between the Black Sea and the Caspian Sea, Georgia is considered the cradle of viticulture and winemaking.

It is said that because of its beauty, god kept a place on earth for himself near the Black Sea, but he gifted it to the Georgians to thank them for inviting him to their great feast and celebration called a Supra. Wine has always been an essential part of Georgian culture and identity. Grape seeds and ceramic jugs called Kvevris (or Qvevris) have been found dating back 8,000 years throughout the country, leading scientists to believe that Georgia was one of the likely birthplaces of viticulture. They also believe that vitis vinifera —the common grape vine originated from the Caucasus mountains which are today the Republic of Georgia.There are claims that the word ghvino (wine) originates in the Georgian language and then spread into many other languages (wine,vin,vino,etc).

Because of its location, throughout history Georgia has had attacks and occupied by the  Persians, Mongols, Ottomans and Soviets. The invaders understood the importance of the grapevine to Georgians culture and survival, so each invader tried without success to eradicate their vineyards. The resilient Georgians escaped with their vine cuttings and planted them high in the mountains, only to replant the original locations after invaders retreated. Another legend says that long ago, before going into battle Georgian soldiers would tie grapevine to their ankles, believing that if they die on the battlefield, the grapevine would grow and use their body as fertilizer. A Georgian toast and greeting is Gaumarjos, which translates to: To your victory!

When visiting Georgia’s capital city Tbilisi, you’ll find more evidence of the importance of wine to Georgia. At the top of Sololaki hill overlooking the old town, there is a statue of a woman who they call Mother of Georgia, named Kartlis Deda. In her right hand, she carries a sword for her enemies, and in her left hand, a bowl of wine to greet her friends.

Though a small country, Georgia has a diverse range of climates from temperate to subtropical.  The Western part of the country near the Black Sea is wet and humid while the East is dry and desert-like.

There are over 500 indigenous grape varietals found in Georgia and the most widely planted and highly regarded Saperavi for reds and Rkatsiteli for white wines.  The lighter more delicate wines typically come from the West such as Imereti region, while the more powerful and heavier wines come from Kakheti in East.

A Kvevri is an egg shaped, handmade clay vessel used to produce and store wine for centuries. Kvevri were even used to store grain and food, and they played an integral part to Georgians surviving invaders, as they used their buried kvevris to hide supplies, food and weapons. Sadly, the art of making kvevris is being lost as modern winemakers often choose to vinify their wines in wood barrels. There are only a handful of artisan families left who understand the art of kvevri making. The ancestral practice of kvevri winemaking has been producing natural wines without the use of chemicals, foreign yeasts, or filtration long before it became a trend.

A kvevri is a thick-walled clay vessel buried deep in the ground in a marani, or Georgian wine cellar. It naturally maintains wine at optimal temperature during fermentation and allows it to age for many years without spoilage. Additionally, its egg shape and small pointed base allow for the seeds, skins, pomace (all called Cha-cha) to settle at the bottom of the vessel. The egg shape also keeps the wine in constant motion, which is ideal for winemaking. The interaction of the wine with its sediment and skins (called “the mother”) adds more complexity and body to the wine while also keeping it chemically stable. Once fermentation is complete, the wine is moved into another kvevri, leaving the heavy sediment behind.  Afterwards, a lid either made of clay or wood, is placed over the top of the kvevri. The lid is secured with clay, and often sulphur wicks to create a clean environment and form a vacuum between the wine and the lid when the sulphur burns. A covering of earth is packed around the lid to insure a secure airtight closure.

While the wine is aging in the qvevri, it interacts with the vessel in a unique way that enhances its distinctive character. White wines made in qvevri are often noted for their color and texture. The extended maceration on the skins provides more pigment to the juice, resulting in “white” wines that appears amber, orange, or gold.

Throughout the 8000 years of winemaking, Georgians also developed natural tools for cleaning and caring for their kvevri such as the “kvevri brush” made from the roots of St.-John’s wort or bitter Cherry tree bark. Typically, the kvevri are cleaned with water and lime or ash solution, and scrubbed with a kvevri brush. The kvevri once buried in the ground can last for hundreds of years, as the only thing that can damage it is an earthquake.  The inside of a kvevri is sometimes lined with beeswax when the clay is too porous, preventing the wine from becoming oxidized or contaminated. The liming of the exterior of kvevris is another unique practice. This helps prevent mold buildup on the outside and preserve the wine when higher than normal temperatures occur during fermentation.

In 2013, UNESCO added kvevri winemaking to its Lists of the Intangible Cultural Heritage of Humanity.  As you drink a glass of Georgian wine, consider how 8,000 years of wine making experience have gone into the production of the special liquid you hold in your hands.  Here is what UNESCO says:

Qvevri wine-making is practiced throughout Georgia, particularly in village communities where unique varieties of grapes are grown. The Qvevri is an egg-shaped earthenware vessel used for making, ageing and storing the wine. Knowledge and experience of Qvevri manufacture and wine-making are passed down by families, neighbors, friends and relatives, all of whom join in communal harvesting and wine-making activities. Children learn how to tend the vines, press grapes, ferment wine, collect clay and make and fire Qvevris through observing their elders. The wine-making process involves pressing the grapes and then pouring the juice, grape skins, stalks and pips into the Qvevri, which is sealed and buried in the ground so that the wine can ferment for five to six months before being drunk. Most farmers and city dwellers use this method of making wine. Wine plays a vital role in everyday life and in the celebration of secular and religious events and rituals. Wine cellars are still considered the holiest place in the family home. The tradition of Qvevri wine-making defines the lifestyle of local communities and forms an inseparable part of their cultural identity and inheritance, with wine and vines frequently evoked in Georgian oral traditions and songs. 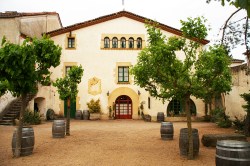 As we pulled up in front of Mas Macia it looked like a quaint little village within itself, on the beautiful grounds covered by the vineyards there is the old 13th Century Catalan house, a restaurant, a church and of course the winery and its cellars. The smell of the fresh-cut grass was refreshing as we stood in the sunlight looking over the 35 hectares of vineyards in prime position, close to the cellars. The charm of this place was in the small details, each the old doors painted bright green a stunning contrast from the golden building. 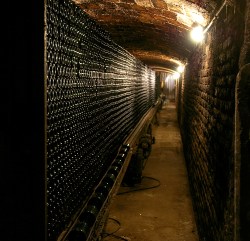 As the roller door slowly raised and revealed the old cellar it was like a step into the medieval underground, the tunnels were lit only slightly and we could see through the shadows the hand-built stone walls. Each of the thousands of bottles lying peacefully yet I felt as though they were living characters, the fermenting cultures inside doing their work to create these luscious cavas.

Like walking onto the stage of a theatre set centuries ago I learnt about a life lived by the ancestors of this family, all of our modern commodities were here just in a very different form. The rooms were lined by the dowry cases of the families’ young girls and the walls covered by artifacts which are a mystery to this day. 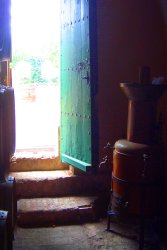 Looking at an old medical kit from a doctor in the family we had to joke as whether they killed more people than they helped with this “high frequency” mess of cords in a case, oh how grateful this made me for today´s medical advancements.  And in case we thought there had been no progress in gender equality we next entered the separate rooms of the women and men to which they could sit and socialize. Of course the latter was rugged and masculine framed by hunting trophies and guns, with the lady’s room displaying the intricate hours of work they would put in to hand making lace.

I heard the story of a certificate framed between two portraits on one of the bedroom walls, these were cousins who were awarded special permission to marry just because their families owned the most favorable fields. I was also shown the two seats which sat either side of the front window where mother and daughter would sit so the conversation of the potential husband could be heard by both. In fact the inside of this house had endless remarkable stories I could have listened to for hours.

Finally I visited the church which bears the scars of the civil war but has certainly retained its beauty. The painting by a famous Catalan artist of his time covering the back wall could be saved as it was on canvas, taken down and hidden from all the destruction. An engraving in the marble of the chairs could still be read “Viva La Republica”. It is said that during this time of war when 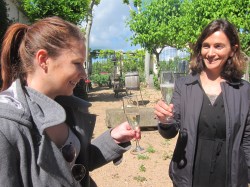 the owners were killed, a witness saw the shooting of the couple. It was only because of his recount of events that the property was inherited by the husband’s family because he told how the wife was the first one shot.

To end my visit we enjoyed the perfect setting for a tasting of the Bohigas Cava Brut 2010 (made from the grape varieties: Macabeo, Xarel.lo & Parellada) in front of the Masia, a true taste of hundreds of years of family tradition.